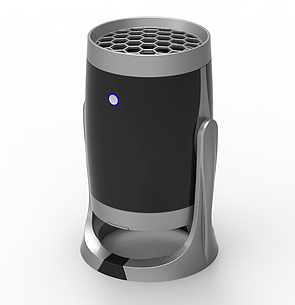 Delafield's technology produces hydrogen peroxide photo-catalytically from ambient oxygen and water vapor; environmentally friendly and game-changing technologyThe hydrogen peroxide is produced as a non-aqueous, non-vapor, "ideal" gasThe very low level of H2O2 are safe for occupied spaces and, despite the low level, effectively reduce microbial contaminants in occupied spacesCapabilities include the reduction of harmful microbes including viruses, bacteria, mold, and other spore contaminants.

iFuzion was contracted to design and engineer the concept from inception. We were given a box of components and challenged to package them into a modern sleek design.

Do you need a prototype fast? Upload your STL file to our state-of-the-art quoting system for an instant online prototyping quote

Get an Instant Online Quote

iFuzion LLC offers special corporate pricing to fit your needs. Get priority on our machines and save up to 40% on your prototyping cost. Contact us for more information.